Developed as a data pack for the Clonk Endeavour engine, this is a simple card matching memory game with cute graphics and nice visual effects.

DownloadSource code
This video shows a complete single-player round of Memory for Clonk. It presents the keyboard controls first, then switches to mouse-based gameplay near the end. The music as well as most graphics in this video are part of Clonk Endeavour and belong to Matthes Bender. See clonk.de for usage terms. 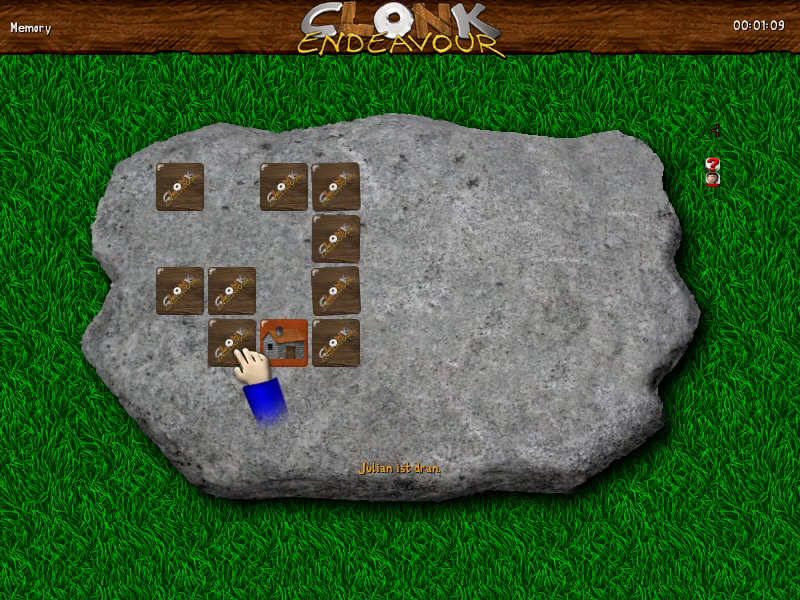 Depending on the size of the game field, a random set of card pairs is placed. The card graphics feature various art assets from the world of Clonk.

The Clonk game series was a mainstay of the German shareware scene in the 90s and early 2000s. It's a little difficult to fit into contemporary mainstream genres, but describing it as a three-way cross between Lemmings, Worms and Settlers may give you an idea. Basically it's a 2D (side view) game featuring teams of little guys battling each other in a destructible landscape which also contains resources that can be mined. As of this writing, the Clonk games are no longer distributed commercially and the core developer community has mostly moved to OpenClonk.

From version 4 onwards, the Clonk games also included an incredibly extensive modding interface consisting of schemas for object definitions and a C-like scripting language called C4Script to drive object behavior. While most mods changed or extended the core gameplay, every so often someone would use the engine to implement a completely different type of game. Memory was one such project. 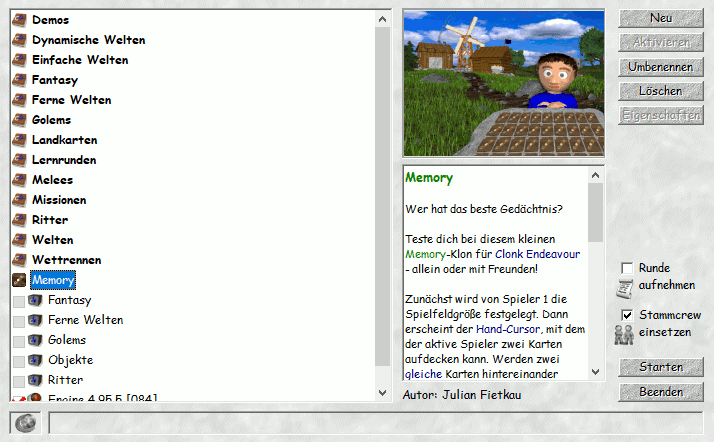 Clonk Endeavour's menu screen shows a list of scenario collections, individual scenarios, and game objects. In this case Memory is selected and its details are shown on the right.

The game uses Clonk's player controls, supporting both mouse and keyboard. It can be played as a single player experience to reach score records, or as a multiplayer game to compete for the biggest number of found pairs. On their turn, players turn over two cards. If they are a matching pair, it is taken out of the game. The game ends when all cards have been cleared off the table.

The last version of Memory for Clonk was a significant update over a previously published version from a few years earlier. In the meantime I had gotten much more proficient at math, allowing me to implement the scripting necessary for the sprite transformations that happen when a card is turned over. As a result the updated version is much nicer to look at, with updated graphics (all drawing from existing Clonk assets) and more attention to detail. The older version is also included as a little easter egg for those curious enough to look. 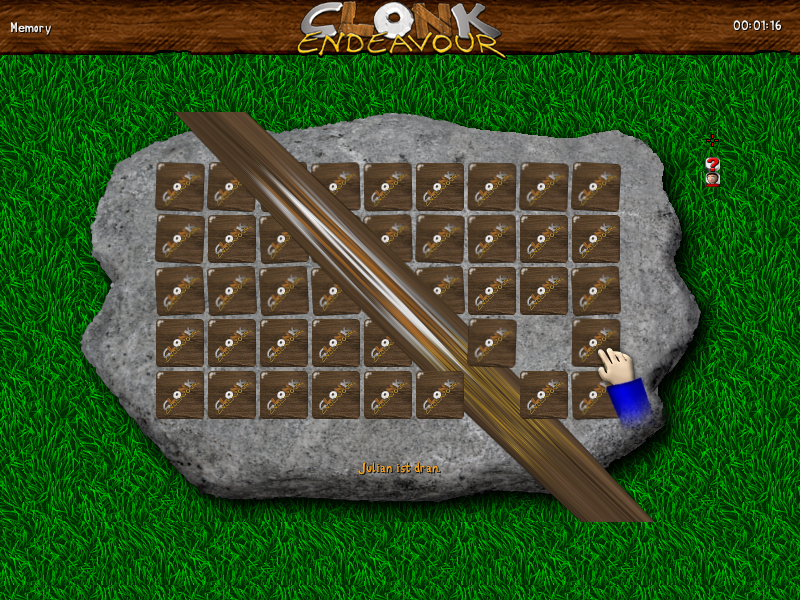 While Memory's C4Script is reasonably robust, it is not immune to bugs. If you turn cards over too quickly, you may be left with a glitched card.

As much of a step up as the 2006 version was over the 2002 one, it is by no means perfect. The animation abstractions are somewhat leaky, and if you click on new cards too quickly before the previous pair has finished its animations, you can cause the transformation to stretch the card out of control as seen in the image next to this paragraph. As far as I know that's the only major bug.

I am now releasing the source code publically and dedicating it to the public domain as described in the Creative Commons Zero 1.0 deed. Mind you, this covers only the C4Script source code (linked as a Zip archive at the top of this page). The complete scenario file for Clonk Endeavour contains a number of original assets created by Matthes Bender and his team, and as such remains partially copyrighted by him. I am permitted to offer the complete scenario as a free download, but beyond that the terms for those assets are out of my hands.

If you would simply like to play Memory, it is compatible with the freeware release of Clonk Endeavour.