Developed in a semester-long university project, Ink Wars is a simple real-time strategy game for Windows that's played over the network.

This footage from a two player game of Ink Wars shows how the ink armies would battle. 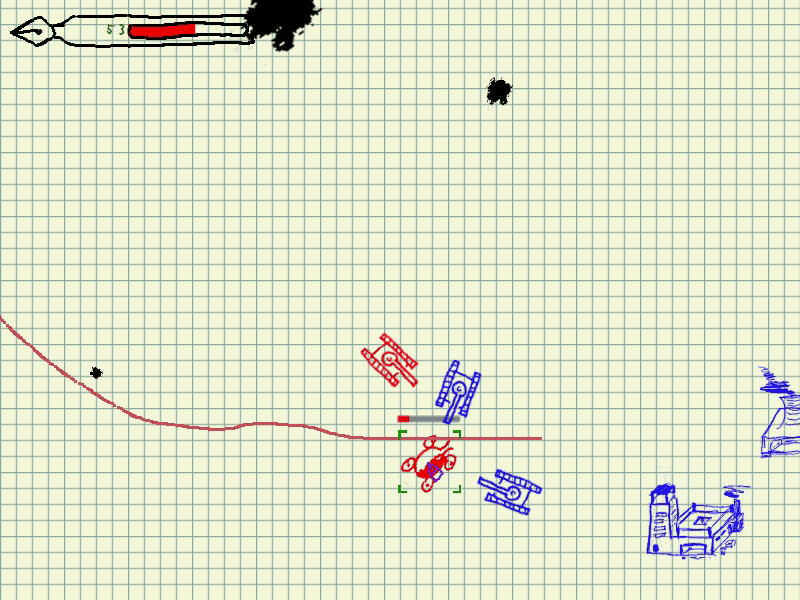 Combat in Ink Wars is conducted by tanks. You can also see a single ink scavenger unit at the bottom of this image.

Ink Wars is a real-time strategy game in which several players on a paper map compete for the land's only resource: ink. Ink is used as the raw material for combat and scavenging units, which can then be sent towards resource patches or an enemy presence. Whoever owns the last standing base building is the winner.

“Playing war on paper” was the guiding metaphor for the design of Ink Wars. In addition to the ink-based manufacturing, the user interface is also themed around this concept. For example, where most strategy games allow players to draw a rectangular selection around several units, Ink Wars instead requires drawing a circle around them, as if circling them with a pen on paper.

Ink Wars runs on Windows and is played over the network. 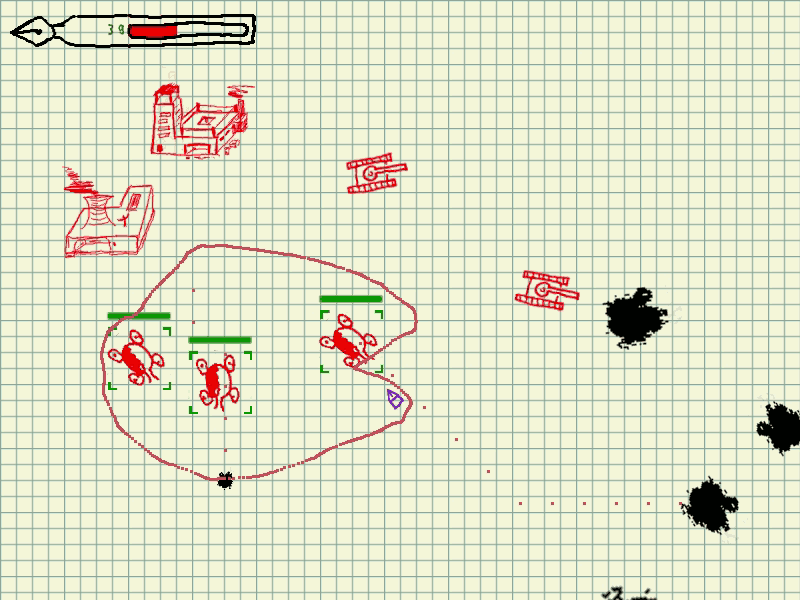 In this screenshot you can see how a player might select three units to send them towards a goal. This game uses arbitrarily shaped selections instead of rectangles.

This game was created during the winter semester of 2009/10 at the Universität Hamburg. Our team of five students was tasked with designing and prototyping a game that would incorporate novel ideas for interaction. We had free reign over any technologies used, but the project organizers provided support for Microsoft XNA, so that's what we ended up using.

There were two other student groups in the project who developed their own games. One was a turn-based Micro Machines style top-down multiplayer racing game, the other was a lane-based endless racer for early iOS. All groups shared a “studio” room at the university and collaborated on an exhibition of the finished games. 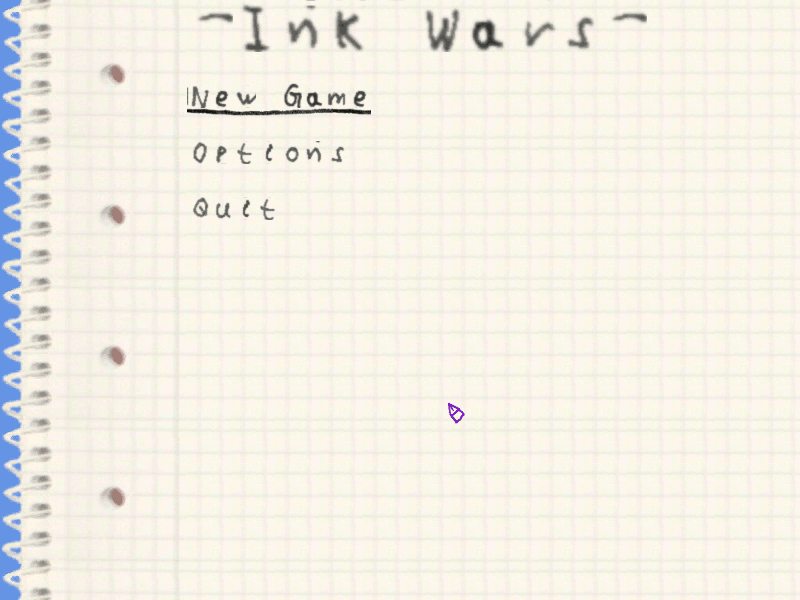 This is the main menu of the game. The paper metaphor was kept consistent for the UI design as well and we implemented a custom bitmap font.

On top of the intended learning goals about working in teams, I took away a new appreciation for different programming styles. Our network code was engineered by someone with significant experience programming close to the metal, and accordingly it used mostly primitive data types and optimized byte structures. The user interface, in contrast, was created by someone who cared deeply about object-oriented structures and made use of all kinds of object-oriented patterns and abstractions. It was a good thing that every programmer was able to choose their tasks according to their own preferences.

After the conclusion of the project, we had a heated discussion about the future of the game, which resulted in a majority being against releasing it as open source, which I was a part of at the time. In hindsight I regret that decision. The team quickly fell out of contact and is now unable to change that decision, as a result the game is stuck in “copyright hell” and unfortunately cannot be released.

This long-form video about Ink Wars was created in 2012 and released on YouTube as a showcase of the project results. It starts with the same gameplay footage seen in the video at the top and then leads into an extended developer commentary.